Thought we could do a fun section of Sports. Lot of neat uplifting and inspiring stories and jokes that would be neat to add! Hope this is ok.

I'll Start off with a Neat thing Peter forwarded me on Golf!

LAW 1:
No matter how bad your last shot was, you
should have Inner peace knowing that a worse
one is yet to come. (This law does not expire on
the 18th hole, since it has the supernatural
tendency to extend over the course of a
tournament, a summer and, eventually, a lifetime.)

LAW 2:
Your best round of golf will be followed almost
immediately by your worst round ever. The
probability of the latter increases with the
number of people you tell about the former.

LAW 3:
Brand new golf balls are water-magnetic. (Though
this cannot be proven in the lab, it is a known fact
that the more expensive the golf ball, the greater
its attraction to water. Expensive clubs have
been known to be partly made with this most
unusual natural alloy.)

LAW 4:
Golf balls never bounce off of trees back into play.
If one does, the tree is breaking a law of the
universe and should be cut down.

LAW 5:
No matter what causes a golfer to muff a shot, all
His playing partners must solemnly chant "You
looked up," or invoke the wrath of the universe.

LAW 6:
The higher a golfer's handicap, the more qualified
he deems himself as an instructor.

LAW 7:
Every par-three hole in the world has a secret
desire to humiliate golfers. The shorter the hole,
the greater its desire.

LAW 9:
Sand is alive. It will swallow your balls.

LAW 10:
A golfer hitting into your group will always be
bigger than anyone in your group. Likewise, a
group you accidentally hit into will consist of a
football player, a professional wrestler, a
convicted murderer and an IRS agent -- or some
similar combination.

LAW 12:
Golf balls from the same "sleeve" tend to follow
one another, particularly out of bounds or into the
water (See LAW 3).

LAW 13:
A severe slice is a thing of awesome power and beauty.

LAW 14:
The person you would most hate to lose to will
always be the one who beats you.

LAW 15 :
The last three holes of a round will automatically
adjust your score to what it really should be.

LAW 16:
Golf should be given up at least twice per month.

LAW 17:
All vows taken on a golf course shall be valid only
until the sunset.

LAW 18:
Since bad shots come in groups of three, your
fourth consecutive bad shot is really the beginning
of the next group of three.

LAW 19:
When you look up and cause an awful shot, you
will always look down again at exactly the
moment when you should have continued
watching the ball if you ever want to see it again.

LAW 20:
The less skilled the player, the more likely he is to
share his ideas about your swing.

LAW 23:
A golf match is a test of your skill against your
opponent's luck.

LAW 25:
Counting on your opponent to inform you when he
breaks a rule is like expecting him to make fun of
his own haircut.


LAW 28:
The shortest distance between any two points on
a golf course is a straight line that passes directly
through the center of a very large tree.

LAW 30:
Every time a golfer makes a birdie, he must
subsequently make two triple bogeys to restore
the fundamental equilibrium of the Universe.

LAW 31:
If you want to hit a 7-iron as far as Tiger Woods
does, simply try to lay up just short of a water hazard.

There are two things you can learn by stopping
your backswing at the top and checking the
position of your hands: how many hands you have,
and which one is wearing the glove.

LAW 36:
Don't buy a putter until you've had a chance to throw it.

Law 38:
It you lose a ball in the water or woods, the stroke doesn't count as the loss of a new $4 ball is penalty enough.

Most things we put up here aren't going to be doctrinally relevant, but like the games we play... they are a lot of fun! I'm sure the Lord must have a laugh when he sees 'em.

Here's a neat One my Brother forwarded to me from the USA!

A man was getting ready to tee off on the first hole when a second golfer approached and asked if he could join him. The first said that he usually played alone, but agreed to the twosome.

They were even after the first few holes. The second guy said, "We're about evenly matched, how about playing for five bucks a hole?" The first guy said that he wasn't much for betting, but agreed to the terms. 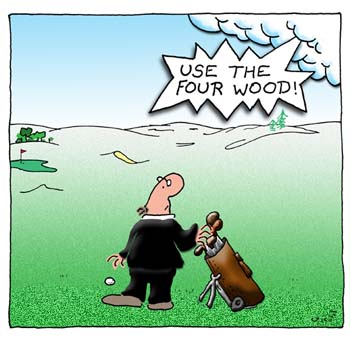 The pro was flustered and apologetic, offering to return the money. The Priest said, "You won fair and square and I was foolish to bet with you. You keep your winnings."

The pro said, "Is there anything I can do to make it up to you?"

The Priest said, "Well, you could come to Mass on Sunday and make a donation......

And, if you want to bring your mother and father along, I'll marry them.