The minister was preoccupied with thoughts of how he was going to alter the worship service, and, ask the congregation to come up with more money than they were expecting for repairs to the church building. Therefore, he was annoyed to find that the regular organist was sick and a substitute had been brought in at the last minute.

The substitute wanted to know what to play. "Here's a copy of the service," he said impatiently. "But you'll have to think of something to play after I make the announcement about the finances."

During the service, the minister paused and said, "Brothers and Sisters, we are in great difficulty; the roof repairs cost twice as much as we expected, and we need $4,000 more. Any of you who can pledge $100 or more, please stand up."

At that moment, the substitute organist played "The Star Spangled Banner."

And that is how the substitute became the regular organist! 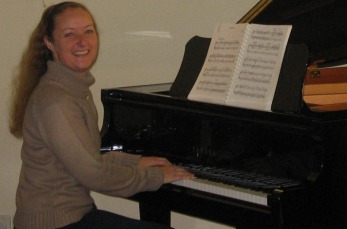 Old Habits
Six nuns were in their third-floor sleeping quarters in the convent when a fire broke out one night. The nuns quickly took off their habits, tied them together to make a rope, and climbed out of the window. After they were safely on the ground and out of the building, a news reporter came over to one of the nuns and asked her, "Weren't you afraid that the habits might have ripped or broke since, they are so old?

The nun smiled and replied, "Oh, no, dear, we weren't worried at all. Don't you know old habits are hard to break?" 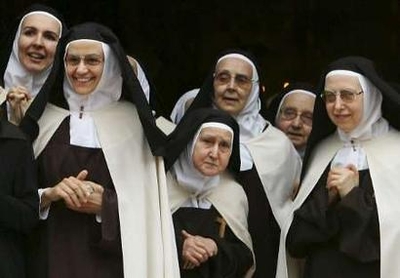 THE HEARTBEAT
A nurse on the pediatric ward, before listening to the little ones’ chests would plug the stethoscope into their ears and let them listen to their own hearts. Their eyes would always light up with awe. But she never got a response to equal four-year-old David’s. Gently he tucked the stethoscope in his ears and placed the disk over his heart.
“Listen,” she said, "What do you suppose that is?" He drew his eyebrows together in a puzzled line and looked up as if lost in the mystery of the strange tap-tap-tapping deep in his chest. Then his face broke out in a wondrous grin. "Is that Jesus knocking?" he asked!

"IN THE NAME OF JESUS"
Paul Harvey told about a 3-year-old boy who went to the grocery store with his mother. Before they entered the grocery store she said to him, "Now you’re not going to get any chocolate chip cookies, so don’t even ask."

She put him up in the cart & he sat in the little child’s seat while she wheeled down the aisles. He was doing just fine until they came to the cookie section. He saw the chocolate chip cookies & he stood up in the seat & said, “Mom, can I have some chocolate chip cookies?” She said, “I told you not even to ask. You’re not going to get any at all.” So he sat back down.

They continued down the aisles, but in their search for certain items they ended up back in the cookie aisle. “Mom, can I please have some chocolate chip cookies?” She said, “I told you that you can’t have any. Now sit down & be quiet.”

Finally, they were approaching the checkout lane. The little boy sensed that this may be his last chance. So just before they got to the line, he stood up on the seat of the cart & shouted in his loudest voice, "In the name of Jesus, may I have some chocolate chip cookies?” And everybody round about just laughed. Some even applauded. And, according to Paul Harvey, due to the generosity of the other shoppers, the little boy & his mother left with 23 boxes of chocolate chip cookies.

Please join me in remembering a great icon of the Christian Entertainment Community. The Pillsbury Doughboy died yesterday of a yeast infection and trauma complications from repeated pokes in the belly. He was 71.

Doughboy was buried in a lightly greased coffin. Dozens of celebrities turned out to pay their respects, including Mrs. Butterworth, Hungry Jack, the California Raisins, Betty Crocker, the Hostess Twinkies, and Captain Crunch. The grave site was piled high with flours. 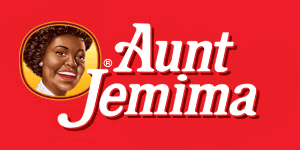 Aunt Jemima delivered the eulogy and lovingly described Doughboy as a man who never knew how much he was kneaded. Born and bread in Minnesota, Doughboy rose quickly in show business, but his later life was filled with turnovers. He was not considered a very smart cookie, wasting much of his dough on half- baked schemes. Despite being a little flaky at times, he still was a crusty old man and was considered a positive roll model for millions.

Doughboy is survived by his wife Play Dough, three children: John Dough, Jane Dough and Dosey Dough, plus they had one in the oven. He is also survived by his elderly father, Pop Tart.

The funeral was held at the Ronald McDonal Funeral Home
at 3:50 for about 20 minutes. 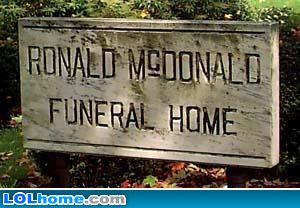 Two North Carolina Rednecks Preachers are out hunting, and as they are walking along they come upon a huge hole in the ground. They approach it and are amazed by the size of it.

The first preacher says, "Wow, that's some hole; I can't even see the bottom. I wonder how deep it is."

The second Preacher says," I don't know, let's throw something down and listen and see how long it takes to hit bottom." 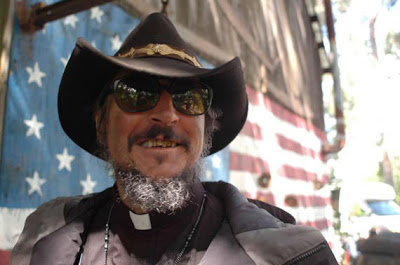 The first preacher says, "Look... There's this old automobile transmission... the Lord hath provided. Here, give me a hand and we'll throw it in and see".

So they pick it up and carry it over, and count one, and two and three, and throw it in the hole.

They are standing there listening and looking over the edge and they hear a rustling in the brush behind them.

As they turn around they see a goat come crashing through the brush,
run up to the hole and with no hesitation, jump in head first.

"Lord what was that", they both said!

While they are standing there looking at each other, looking in
the hole and trying to figure out the spiritual significance of what has just happened and what that was all about, an old farmer walks up.

"Say there," says the farmer, "you fellers didn't happen to see my goat around here anywhere, did you?" 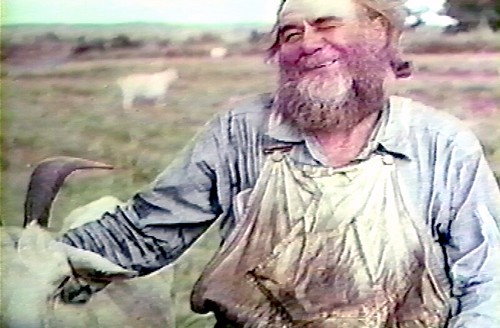 The first preacher says, " Funny you should ask, but we were just standing here a minute ago and a goat come running out of the bushes doin' about a hunert miles an hour and jumped headfirst into this hole
here!"

I had him chained to a transmission!"

Thanks Larry! We're all laughing over here!

BILLY GRAHAM'S SUIT
A Heartwarming Story!
Billy Graham is now 91-years-old with Parkinson's disease. In January 2000, leaders in Charlotte , North Carolina , invited their favorite son, Billy Graham, to a luncheon in his honor. 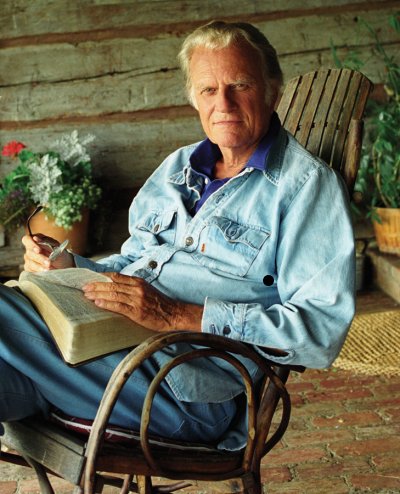 Billy initially hesitated to accept the invitation because he struggles with Parkinson's disease. But the Charlotte leaders said, 'We don't expect a major address. Just come and let us honor you.' So he agreed.

After wonderful things were said about him, Dr. Graham
stepped to the rostrum, looked at the crowd, and said...

"I'm reminded today of Albert Einstein, the great physicist who this month has been honored by Time magazine as the Man of the Century. 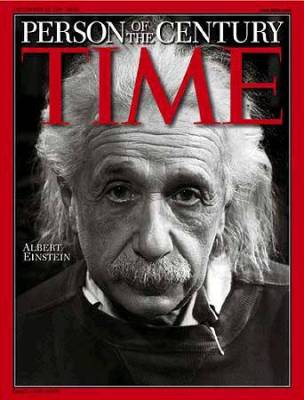 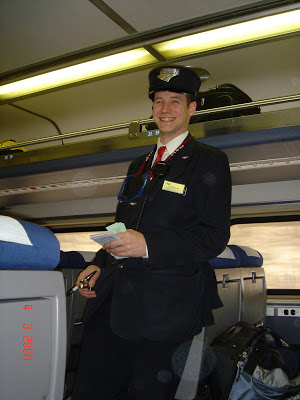 "Einstein nodded appreciatively. The conductor continued down the aisle punching tickets. As he was ready to move to the next car, he turned around and saw the great physicist down on his hands and knees looking under his seat for his ticket.

"The conductor rushed back and said, 'Dr. Einstein, Dr. Einstein, don't worry, I know who you are; no problem. You don't need a ticket. I'm sure you bought one.' Einstein looked at him and said,

Having said that Billy Graham continued,

"See the suit I'm wearing? It's a brand new suit. My children, and my grandchildren are telling me I've gotten a little slovenly in my old age. I used to be a bit more fastidious. So I went out and bought a new suit for this luncheon and one more occasion. You know what that occasion is? This is the suit in which I'll be buried. But when you hear I'm dead, I don't want you to immediately remember the suit I'm wearing. I want you to remember this: I not only know who I am. I also know where I'm going."

May your troubles be less, your blessings more, and may nothing but happiness, come through your door.

"Life without God is like an unsharpened pencil - it has no point."

Neatest thing about that story is it's true! All of it! Thanks Susan... Great Post!